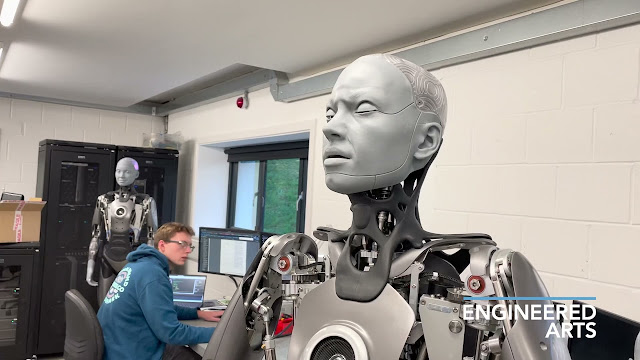 Engineered Arts, based in the United Kingdom, has been manufacturing humanoid robots since 2005, but its creations have advanced significantly since its early robotic puppets. Its latest, Ameca, does indeed venture into the uncanny valley. The robot’s facial expressions are created using artificial intelligence.

Ameca is not equipped with artificial intelligence. Essentially, it’s a lifelike bust that businesses can program to create natural human expressions for promotional purposes, films, or anything else they can imagine. While it makes use of facial gestures and hand movements, it is unable to walk or speak.

The project is a follow-up to EA’s previous humanoid robot Mesmer, which was designed to mimic humans. Consider Mesmer as a puppet that EA can affix to any model’s face and control remotely.

It’s difficult to determine which creation is the more unsettling. Mesmer appears more human, but his facial gestures are more mechanical than those of Ameca.

Regardless of where the two fall on the scale, they are prime examples of the direction robotics and artificial intelligence are taking. We are not far from having functioning androids akin to those featured in countless television shows and feature films.

Although Ameca is unable to walk at the moment, Engineering Arts hopes to make its robots ambulatory in the future. The company’s vision may be closer than we believe, given Boston Dynamics’ work in this area.

How do you feel? Would you consider owning a lifelike robot to keep you company or do your dishes if they were affordable, or is the whole concept too creepy?