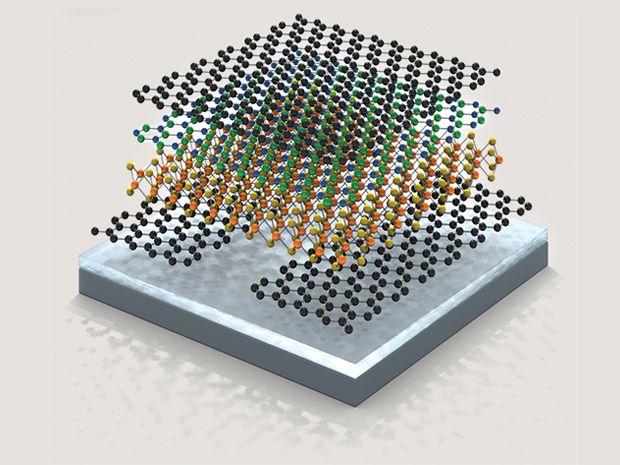 It has been discovered that a recently discovered family of two-dimensional (2D) semiconductors could pave the way for the development of high-performance and energy-efficient electronics, according to researchers from Singapore University of Technology and Design (SUTD). It is hoped that their findings, which were published in the journal npj 2D Materials and Applications, will pave the way for the fabrication of semiconductor devices that can be used in mainstream electronics and optoelectronics—and even the eventual replacement of silicon-based device technology.

When it comes to the quest to miniaturize electronic devices, one well-known trend is Moore’s law. This law describes how the number of components in integrated circuits of computers doubles every two years, and it has been applied to computers since 1965. Increasingly small transistors, some of which are so small that they can be crammed onto a chip as small as the tip of your fingernail, allow for this trend to be possible. In the meantime, however, engineers are beginning to grapple with the inherent material limitations of silicon-based device technology as the trend continues.

In the study, SUTD Assistant Professor Ang Yee Sin, who led the research, explained that shrinking a silicon-based transistor too small would result in “highly uncontrollable device behaviors” because of the quantum tunneling effect. It is now necessary to look beyond silicon for new materials to replace it, and 2D semiconductors are a promising candidate in this regard.

2D semiconductors are materials that are only a few atoms thick and can conduct electricity. Because of their nanoscale size, such materials are strong contenders to replace silicon in the quest to develop compact electronic devices that are both lightweight and energy efficient. When they come into contact with metals, many of the 2D semiconductors currently on the market suffer from high electrical resistance, which makes them unsuitable for many applications.

In many cases, when you make a contact between a metal and a semiconductor, you will encounter what is known as a Schottky barrier, according to Ang. When you apply a high voltage to this barrier, you waste electricity and generate waste heat as a result of the resistance being broken.

A group of researchers became interested in Ohmic contacts, which are metal-semiconductor contacts that do not have a Schottky barrier. As a result of their research, Ang and colleagues from Nanjing University, the National University of Singapore, and Zhejiang University demonstrated that a recently discovered family of 2D semiconductors, namely MoSi2N4 and WSi2N4, form Ohmic contacts with the metals titanium, scandium, and nickel, all of which are widely used in the semiconductor device manufacturing industry.

The researchers also demonstrated that the new materials are free of Fermi level pinning (FLP), a problem that limits the application potential of other 2D semiconductors to a significant degree.

FLP is an adverse effect that occurs in many metal-semiconductor contacts and is caused by defects and complex materials interactions at the contact interface, according to Ang’s explanation. Regardless of the metal used in the contact, this type of effect “pins” the electrical properties of the contact to a specific range of characteristics.

Engineers are unable to tune or adjust the Schottky barrier between the metal and the semiconductor as a result of FLP, which reduces the design flexibility of a semiconductor device significantly.

To reduce FLP, engineers typically employ strategies such as positioning the metal on top of the 2D semiconductor very gently and slowly, creating a buffer layer between the metal and the semiconductor, or using a 2D metal as a contact material with the 2D semiconductor. Even though these methods are technically feasible, they are not yet practical and are incompatible with mass fabrication using current mainstream industry techniques, which are currently available.

Amazingly, Ang’s team demonstrated that MoSi2N4 and WSi2N4 are naturally protected from FLP due to the presence of an inert Si-N outer layer that shields the underlying semiconducting layer from defects and material interactions at the interface.

Because of this protection, the Schottky barrier is able to be ‘unpinned’ and tuned to meet a wide range of application requirements. Two-dimensional semiconductors are becoming more competitive as a silicon-based technology replacement, with major players such as TSMC and Samsung already expressing interest in 2D semiconductor electronics.

Ang hopes that their work will encourage other researchers to investigate more members of the newly discovered 2D semiconductor family for interesting properties, including those that have applications outside of electronics, and to publish their findings.

The researcher concluded that while some of the materials were “poor in terms of electronics applications,” they were “excellent in spintronics, photocatalysts, and as a building block for solar cells.” In order to categorize these 2D materials according to their potential applications, “our next challenge is to scan through all of these 2D materials in an organized manner.”