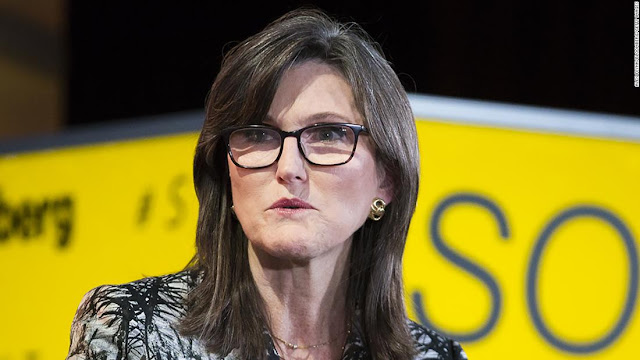 At a time when many investors are content to follow the crowd and invest in established technology companies such as Apple, Amazon, and Microsoft, Cathie Wood is on the hunt for the next great innovators in hot fields such as robotics, fintech, and space exploration.

This is a high-flying, high-risk, high-reward investment tier. And it’s thrown Wood’s fans for a loop in 2021.

Wood’s strategy generated enormous returns for investors in her flagship Ark Innovation (ARKK) exchange-traded fund last year. It more than doubled in 2020, establishing her as a Wall Street superstar — a sort of Warren Buffett of momentum investing.

However, this year has not been nearly as kind to Wood as the previous one was. Through late August, the Innovation ETF was down 2.5 percent, despite a roaring market for technology, with the Nasdaq up more than 18 percent so far in 2021.

Wood was not available for comment for this story, but she reaffirmed her position in an August interview with CNBC. She is unconcerned that the Ark strategy of identifying new technology leaders will fail, and she is confident that his current rally will not resemble the epic 2000 dot-com implosion.

“I don’t believe we’re in a bubble, as many bears believe,” Wood told CNBC. “At the moment, we do not have anything comparable. Indeed, you see a plethora of initial public offerings (IPOs) and SPACs coming to market and collapsing. We are the furthest thing from a bubble.”

How Wood devised her plan

Wood is speaking from personal experience. She is not a millennial or Gen Z investor who views the 2000 technology implosion as a war story told by folder traders. Wood, 65, witnessed the most recent major technology crash as well as 1987’s infamous Black Monday.

She spent 18 years in the 1980s and 1990s working for Prudential-owned money manager Jennison Associates and then spent a dozen years at AllianceBernstein before leaving in 2013.

However, AllianceBernstein declined to pursue her idea for an actively managed exchange-traded fund suite. As a result, she struck out on her own in 2014 and founded Ark.

“I’ve spent my career observing disruptive innovation — why not help my own sector along?” she told Forbes in a 2014 interview.

Due to her focus on disruption, Wood ties the fortunes of her ETF to visionary but erratic leaders.

In the most egregious case, Wood continues to be an unabashed supporter of Tesla (TSLA) and CEO Elon Musk. The EV manufacturer is by far the largest holding in Ark’s Innovation ETF, accounting for more than 10% of the fund’s holdings. Additionally, it holds the largest position in Ark’s Autonomous Technology & Robotics (ARKQ) and Next Generation Internet (ARKW) exchange-traded funds.

Wood is also in favor of companies such as Tesla issuing additional stock in order to raise money for futuristic projects such as autonomous vehicles. Some investors are skeptical of that strategy because the new shares dilute existing investors’ holdings, but she believes that is a short-sighted argument, particularly from Tesla bears.

“We are not afraid of dilution… if we believe they are acting in good faith,” she told CNBC. “We wanted them to scale quickly because we believe that if we are correct about autonomous vehicles, Tesla could capture the lion’s share of that market, at least in the United States.”

Ark’s significant investment in Tesla is a bet on Musk continuing to innovate outside of the electric vehicle business, Wood explained in an August interview with Bloomberg Radio. For instance, she gushed about Tesla’s plans to build a humanoid robot.

“With each passing day, and particularly as we learn more about their AI expertise and how they’re truly driving the space forward, we believe they have the pole position,” she said, adding that Ark analysts were “blown away” by Musk’s presentation.

Growth at all costs

Wood acknowledges that her growth-at-all-costs investment strategy is not for everyone.

This year, Tesla has lagged behind the broader market. Teladoc (TDOC), a telehealth company that is the ETF’s second largest holding and was a big winner at the start of the pandemic, is down more than 25% in 2021.

“This year, we’ve seen a significant decline in higher-priced stocks. However, the growth of these innovative businesses will continue to be treated favorably over time “Wood stated this during a March webcast hosted by Cboe Global Markets.

Wood added that she believes investors should also invest a small portion of their funds in bitcoin, another high-risk bet. Additionally, she emphasized the importance of investors overlooking the inevitable short-term bumps that come with any asset. Wood believes that it is critical to maintain longer-term convictions and to invest for future growth.

“Many companies that cater to short-term investors seeking profits have now prioritized stock buybacks and dividends over innovation,” she explained. “This puts them in danger.”

“Cathie has been concentrating her efforts on Tesla for a long period of time. She does not view it solely through the lens of an automobile manufacturer. You cannot compare it to traditional automobile manufacturers “Ren Leggi, Ark Invest’s client portfolio manager, told CNN Business in March that he works closely with Wood on investment decisions.

However, an increasing number of skeptics believe Wood’s funds will eventually fail. Michael Burry, one of the “The Big Short’s” most bearish investors, recently established a short position in the Ark Innovation ETF, essentially betting on its sharp decline.

Additionally, some tech stock veterans wonder if Wood is a passing fad, comparing her to former popular portfolio managers such as Kevin Landis of Firsthand Funds, Alberto Vilar of Amerindo, and Garrett Van Wagoner, who ran a popular emerging-growth fund in the late 1990s.

Numerous those technology funds imploded in the aftermath of the 2000 bubble. In 2010, The Wall Street Journal published a retrospective piece on Van Wagoner and other late-1990s technology gurus with the headline “From Fortune and Fame to Flamed-Out Stars. Tech-Fund Mavens’ Post-Bust Fate”