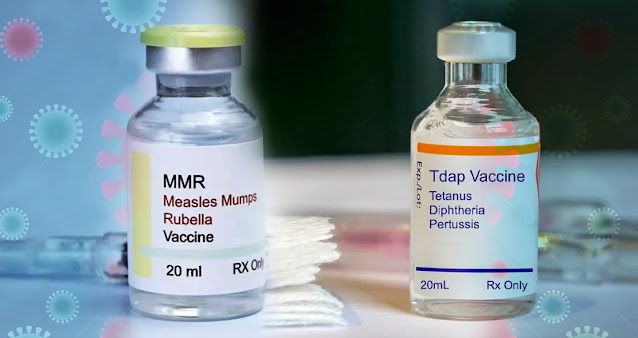 According to a study, the Measles-Mumps-Rubella (MMR) and Tetanus-Diphtheria-Pertussis (Tdap) vaccines are associated with increased protection against COVID-19 as well as a reduction in the severity of the disease.

The researchers at Brigham and Women’s Hospital in the United States noted that vaccines are designed to elicit a powerful and long-lasting immune response by stimulating the production of memory T cells and B cells in the recipient.

But it is possible that these vaccines will also elicit cross-reactive memory T cells capable of responding to protein targets known as antigens present in other disease-causing microbes, such as the viral antigens inS-CoV-2, in addition to the antigens inS-CoV-2.

Suggestions from the Findings

The findings of the study, which were published in the journal Med, suggest that pre-existing memory T cells generated by prior MMR or Tdap vaccination and activated by S-CoV-2 infection provide the immune system with a head start in responding to the virus, reducing the risk of severe disease and mortality.

In this study, the researchers used these techniques to assess the response of T cells isolated from the blood of COVID-19 convalescent patients and patients who had been vaccinated against the disease to antigens from S-CoV-2 as well as the MMR and Tdap vaccines, respectively.

Following an analysis of a large, well-annotated cohort of COVID-19 patients, the team discovered that prior MMR or Tdap vaccination was associated with decreased disease severity. The team included researchers from the Cleveland Clinic in the United States.

The researchers “observed an association where individuals with COVID-19 who had either the MMR or Tdap vaccine had a significantly lower frequency of being admitted to the intensive care unit or dying,” according to study co-author Andrew Lichtman of the Brigham and Women’s Hospital in Boston, Massachusetts.

In laboratory experiments using COVID-19 convalescent blood, the researchers discovered that whenever they observed a heightened T cell response to S-CoV-2 proteins, they also observed an increased response to proteins from MMR and Tdap, which they had been using as controls.

According to the researchers, this was observed in both COVID-19 convalescent and uninfected individuals who had been vaccinated against S-CoV-2.

They also conducted a retrospective cohort study, which included data from more than 75,000 patients in Ohio and Florida who had tested positive for COVID-19 between March 8, 2020, and March 31, 2021, and who were followed up afterward.

According to the findings of the study, patients who had previously received a Tdap vaccination had 23 percent and 20 percent lower rates of these outcomes, respectively, than those who had not.

Lara Jehi, Chief Research Information Officer of the Cleveland Clinic Health System, and her colleagues concluded that the study’s findings go beyond simply learning about the potential benefits of the MMR and Tdap vaccines in the context of COVID-19. “This study provides a blueprint for accelerating research,” said Jehi, who is also a study co-author.

The researchers stated that while their laboratory-based findings are supported by epidemiological observations, additional research is needed to determine whether there is a causal relationship between the MMR and Tdap vaccinations and the severity of COVID-19 disease in order to determine if the relationship is causal in nature.

They went on to say that prospective studies of vaccination and patient outcomes may be useful in distinguishing correlation from causation.