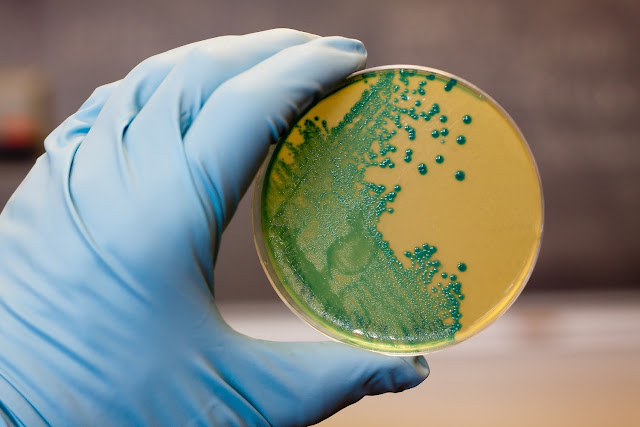 Micro-organisms: are small tiny organisms that cannot be seen with the aid of an eye but with the use of a Microscope.

This is also one of the physical methods that eliminate disease causing agent which is used in food technology.irradiation is the process by which an object is exposed to radiation. Radiation is the emission ir transmission of energy in the form of waves particles through space or a material medium such as visible light, radio waves.

The most widely used of non -ionizing radiation is the utraviolet light(Lamp), uv lamps are commonly found in food preparation areas, operating theatres and specialist areas such as tissue culture facilities, where it is important to prevent contamination, because they are harmful to humans particularly the skin and eyes.

IV lamps can only be operated in such areas when people are not present. Uv radiation has penetrating power; a thin layer if glass, paper  or fabrics  can be used to impede the passage of the rays. it is also applies in the sterilization of work surfaces and around the surrounding air and also in the treatment of water supplies.

Gamma radiation is used in situations where heat sterilization is inappropriate,to prevent undesirable effect in the texture, taste or appearance of some product. This mainly relates to fresh produce such as meat, poultry, fruit, vegetables. Irradiation is not suitable for some foodstuff such as those with high content of fats where unpleasant tastes and odours results.

This is another physical method by which micro-organism can be eliminated rather than killing them the micro-organism are isolated. This can be done for liquid and gas by passing them through filters of an appropriate pore size. Filters are made from materials such as asbestos and sintered glass, but they have been replaced by membrane filters,commonly made of nitrocellulose or polycarbonate.

Supplies of air or other gases can also be filters – sterilized in this  process. A pore hole size of 0.22 micrometre is commonly used, these will remove bacteria or any thing bigger such as yeasts.

However, Mycoplasma and viruses are able to pass through pore of this size with a pore size 10 times smaller than this, only the smallest of viruses can pass through it, so it is important that an appropriate pore size is chosen for any given task for effective and absolute perfect results.

These are substances that kill micro-organisms. For example a germicide kills pathogens (also known as non pathogens)

A disinfectant or antiseptic can be effective or active against a specific group of organism and they are bactericide, fungicide, viricide and algicide (Algae).

The agent that kills micro- organisms or inhibit their growth are affected by six factors and they include:

Population size: The larger the size of an organisms, the longer time it takes for them to die, because an equal size of a microbial population is killed during each interval. The smaller the bacteria the shorter the time it takes.

Population composition: The effectiveness of an agent varies greatly with the nature of the organisms being treated because micro-organisms  differ and varies in size. Bacteria endospores are much more resistant to most anti-microbial agents than vegetative forms, younger cells are usually more readily destroyed than matured organisms.

Some species are able to withstand adverse conditions better than others. For example Mycobacterium tuberculosis is much more resistant to anti-microbial agents than most other bacteria.

Duration of exposures: When an organisms is exposed to a microbial agent that are destroyed, the length at which they are exposed to this agents will determine how faster the organisms will be killed. For instance to achieve optimal sterilization, an exposure duration is required to acquire good results.

Temperature: An increase in temperature ,increase the activity of a chemical agent. Frequently a lower concentration of disinfectant or sterilizing agent can be used at a higher temperature.

Local environment: The population of organisms to be controlled are surrounded by environmental factor that may either offer protection or aids in its destruction. For example, heat kills rapidly at acid ph, acid foods and beverages such as fruits, tomatoes are easier to pasteurized than food  with higher ph like milk. An important environmental factor is organic matters that can protect milk against heat and chemical disinfectant.

The basic units of all living things is the cell. The cell is the fundamental unit of biology, which  states that all organisms are made up of cells also cells are derive from other pre-existing cells. An organism that has just a single cell are called (unicellular) while those with several distinct cell types with specialized functions are (Multicellular)organisms. All bacteria and protozoans are unicellular organisms, fungi may be uni or multicellur while algae exists in the forms.

All organism are made of two distinct cell types, which we call prokaryotic and eukaryotic cell microbial world. They are different from each other in many ways, including size, structure, and genetic material. The most fundamental difference between prokaryotic and eukaryotic are reflected in their names; eukaryotic cell possess a true nucleus and several other distinct subcellular organelles that are bounded by a membranes. Prokaryotes have no such organelles.

Their ribosomes act as site of protein synthesis
Genetic information are encoded in the D.N.A
Cell contents are bounded by a plasma  membrane.

Also read this: Control of Micro-Organisms

Reasons of Stomach Pain and its Side effect

No comments to show.

Tips For Entrepreneurs to Write an Impressive Business Plan Writing?

How to Tackle a Personal Statement Writing Task?