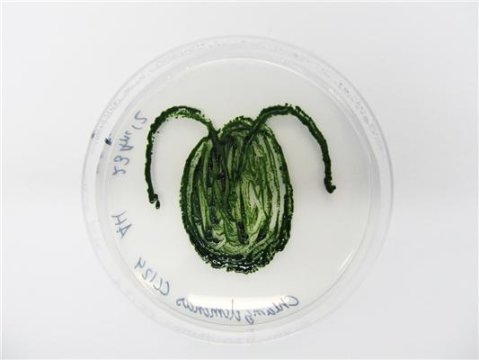 When green algae “can’t breathe,” they get rid of excess energy through the production of hydrogen. Biologists at the Ruhr-Universität Bochum have found out how the cells notice the absence of oxygen. For this, they need the messenger molecule nitric oxide and the protein haemoglobin, which is commonly known from red blood cells of humans. With colleagues at the UC Los Angeles, the Bochum team reported in the journal PNAS.

Haemoglobin — an old protein in a new look

In the human body, haemoglobin transports oxygen from the lungs to the organs and brings carbon dioxide, which is produced there, back to the lungs. “However, scientists have known for years that there is not just the one haemoglobin,” says Prof. Thomas Happe from the Work Group Photobiotechnology. Nature has produced a large number of related proteins which fulfil different functions. The green alga Chlamydomonas reinhardtii has what is known as a “truncated” haemoglobin, the function of which was previously unknown. Happe’s team has deciphered its role in surviving in an oxygen-free environment.

In an oxygen-free environment, the green alga activates specific genes

When Chlamydomonas has no oxygen available, the algae transfer excess electrons to protons, creating hydrogen (H2). “For this to work, the green alga activates a certain gene programme and creates many new proteins,” Happe explains. “But how exactly the cells even notice that oxygen is missing is something we did not know.” The research team looked for genes that are particularly active when green algae have to live without oxygen — and found a gene that forms the blueprint for a haemoglobin. In an oxygen-rich environment, however, this gene was completely idle.

A haemoglobin and nitric oxide help green algae to survive

The scientists studied the haemoglobin protein and its genetic blueprint in more detail using molecular biological and biochemical analyses. “One thing became clear very quickly,” says Dr. Anja Hemschemeier from the Work Group Photobiotechnology. “Algae in which we switched this gene off could hardly grow without oxygen.” From previous studies it is known that in many organisms, haemoglobin detoxifies nitric oxide, because an overdose of this gas poisons the cells. The biologists therefore tested whether green algae which are no longer able to form haemoglobin after genetic manipulation die of nitric oxide poisoning. Their expectations: the green algae should fare better if the gas is removed using a chemical scavenger. “Surprisingly, then the algae were not able to grow at all,” says Hemschemeier. The researchers concluded that, under oxygen-free conditions, haemoglobin and nitric oxide are in cahoots.