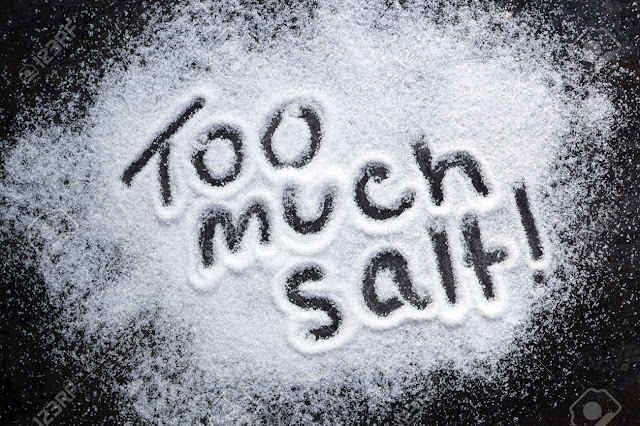 From our history books, we know that salt is a pivotal “ingredient” to the rise of civilizations. This mineral was used in barters or trading, in which its value was quite the same as gold.

Salt is also extremely important in food preservation. Up until now, salt is universally used as a natural preservative, as a seasoning added to foodstuffs and as a fixed condiment during mealtimes.

We all know this, of course. However, we must take precaution: salt is ever-present in everything we eat that we may be overlooking its negative effects on our body.

Just like the excessive intake of foods with sugar, eating foods with too much salt is proven to have several negative effects. The United States Centers for Disease Control and Prevention (CDC) even warned on Thursday that Americans in particular are eating too much salty foods, and it is damaging their heart health.

In a report featured in Morbidity and Mortality Weekly, the CDC revealed that about 90 percent of adults in the U.S. were consuming more than the recommended daily amount (RDA) of salt which was 2,300 milligrams from 2009 to 2012. The data come from the National Health and Nutrition Examination Survey or NHANES.

For adults aged 51 and above, the numbers were significantly lower, while about 90 percent of U.S. children also exceeded the RDA for their age groups. Boys and girls who were aged nine to 13 years old consumed about 3,300 mg and 3,000 mg of salt respectively, a number significantly above the recommended 2,200 mg of salt deemed healthy.

All these statistics mean that three out of every four people in the U.S. are at risk of developing cardiovascular diseases.

“The evidence is clear: too much sodium in our foods leads to high blood pressure, a major risk factor for heart disease and stroke,”

The Salt We Get From Processed Foods

Here’s the catch: all these sodium intakes don’t come from the salt shaker, which are easier to control and regulate, but from the salt found in processed foods we buy and meals we eat in restaurants.

“It’s very difficult for individuals to lower consumption on their own, because there’s so much sodium in everything they eat,” said CDC Director Tom Frieden.

Frieden said salt is found everywhere that even if stop using the salt shaker, you will still be taking in too much salt from processed foods.

According to the CDC, foods that contain the most sodium are pizza, cold cuts, cured meats, breads, and rolls. “Even foods that taste sweet, like cakes and puddings, often contain salt,” said Frieden.

Aside from hypertension and increased risks for heart diseases, eating too much salt affects different parts of the body.

Experts at Harvard University said too much sodium in the body inhibits the absorption of calcium, resulting to a loss of bone mass and increasing the porousness of your bones. This in turn can lead to osteoporosis, or the thinning of the bones.

People with diabetes, women after menopause and elderly people should be careful in their salt intake in particular because too much salt can increase chances for fractures and other skeletal deformations. A previous study in menopausal women found that the loss of hip bone density and the onset of bone loss were connected to the high excretion of salt in the urine.