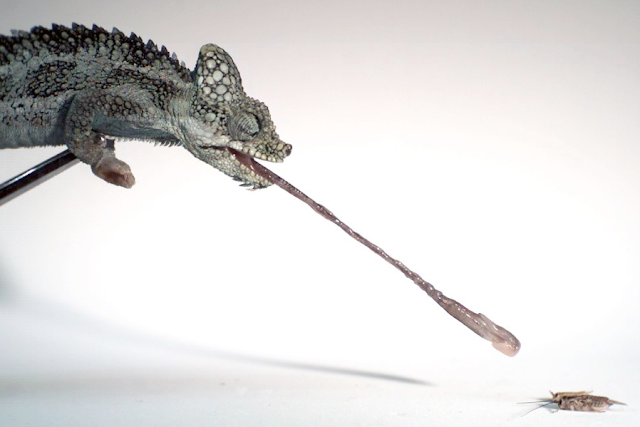 A chameleon less than two inches long has one of the quickest tongues in the animal world, able to let it fly toward its insect prey with an acceleration of 264 Gs, researchers found.

That’s like a car accelerating from zero to 60 in about a hundredth of a second, says Brown University biologist Christopher Anderson.

Curious just how powerful a chameleon’s tongue could be, Anderson studied 20 different species of varying sizes, capturing their feeding events with high-speed cameras shooting at 3,000 frames per second.

In a surprising finding, Anderson found that the smaller the chameleon, the greater the acceleration, relative force and relative length of its tongue.

“Smaller species have higher performance than larger species,” he says.

In Rhampholeon spinosus, the smallest species studied, the tongue — 2.5 times the length of its body — could be launched toward a target prey at 8,500 feet per second.

It can snag a cricket meal in just around 20 milliseconds, he notes.

The speedy tongues of smaller chameleon species let them capture more prey, important to fuel a metabolism that runs at a higher rate than that of their larger cousins and thus needs more energy per body weight, according to his study appearing in the journal Scientific Reports.

It’s an evolutionary feature that makes sense, Anderson says; while all chameleons possess the same mechanism used to launch their tongues, the mechanism gets proportionally bigger as the species get smaller.

“It’s an example of morphological evolution being driven by metabolic constraints,” Anderson says.

As an example, he says, in the largest species studied — the 2-foot-long Furcifer oustaleti — peak acceleration of the tongue was just 18 percent of that seen in Rhampholeon spinosus.

Smaller chameleons often make up for lack of size with more power, he says, like a smaller sports car given higher performance by a relatively powerful engine

“As body size increases, acceleration capacity decreases,” he says. “So, small organisms, based on physics alone, are expected to have high accelerations.”

In the case of the chameleon, the motion of their tongues features the greatest acceleration and power output produced per kilogram of muscle mass for any reptile, bird, or mammal, he explains.

It’s not just spontaneous muscle power that gives the lizards that edge, he says; their secret is to preload a large portion of total energy available into elastic tissues in the tongue.

The result? An almost instant insect meal, and survival for the smallest chameleon species.