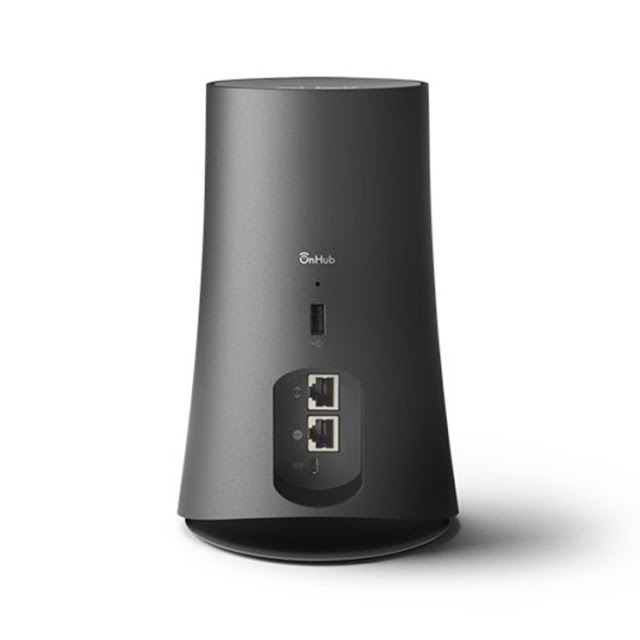 When the first Google OnHub router was reviewed (manufactured by TP-Link) back in September, it was given high marks for its stylish looks, solid short-range performance, and ease of use, but we dinged it for not offering basic management features, such as parental controls and guest networking. They were also disappointed that a few of its more appealing features were not yet enabled. The new Asus Google OnHub SRT-AC1900  may look a bit different than its predecessor, but it’s still a cool-looking router that delivers good close-proximity performance and is very easy to set up. Unfortunately, it suffers from many of the same issues as the original OnHub, and it’s a bit more expensive too.

The Asus OnHub shares the same cylindrical shape as the original model, but this time around the base is wider than the top instead of the other way around. It also has a speaker and an LED ring embedded in the base instead of the top. The light ring glows teal when the router is up and running, blue during setup, and amber when there is a problem that requires troubleshooting. The router stands 7.8 inches high and is 5.2 inches wide at the base. It tapers off to 4 inches wide at the top and has a slate-gray finish.

This dual-band AC1900 router is capable of maximum throughput speeds of 600Mbps on the 2.4GHz band and 1,300Mbps on the 5GHz band. It supports 802.11ac Wi-Fi and is equipped with a 1.4GHz dual-core processor, 4GB of RAM, seven internal Wi-Fi antennas, a Bluetooth antenna, and a Zigbee 802.15.4 (home-automation) antenna. As is the case with the TP-Link OnHub, the Zigbee and Bluetooth features are not yet enabled, but will be activated via a firmware update at a later date.

The Asus OnHub also has a built-in proximity sensor that enables the router’s Wave Control feature, and a congestion-sensing radio that polls wireless activity and automatically changes channels to increase performance. Wave Control is a Quality of Service (QoS) feature that lets you give network priority to a predetermined client by waving your hand over the router. You can give the preferred client network priority for 1, 2, or 4 hours but you can’t permanently assign priority to any device, nor can you assign a specific radio band to any device (both bands appear as a single network SSID).

You don’t have to remove the outer shell to gain access to the ports like you do with the TP-Link OnHub. In fact, the Asus OnHub’s shell is screwed in and not meant for removal. A meager selection of network ports is located in a recess at the base that holds a WAN (Internet) port, a single gigabit LAN port, and a Power jack. Just above the recess is a lone USB 3.0 port that is reserved for recovery use and is not meant for connecting external peripherals, such as USB drives and printers. In comparison, the Asus RT-AC68U Dual-Band Wireless-AC1900 Gigabit Router£129.99 at PC World is equipped with four wired LAN ports and a pair of fully functional USB ports.

As with the TP-Link OnHub, you can’t access this router’s settings via a Web-based console. Instead, the Asus OnHub is controlled using the Google On app for iOS and Android mobile devices. The app is tastefully designed and offers lots of tips, tutorials, and troubleshooting advice, but it’s missing some important management features, including guest networking, parental controls, QoS settings for multiple clients, website blocking, and Virtual Private Network (VPN) settings. However, it does allow you to select DHCP or Static IP addressing, enable Wave Control priority for a single device, operate the router in Bridge mode, create a custom DNS, and enable Port Forwarding. The opening screen displays a network map with connected devices and has a network-check utility that measures your mobile device’s potential Internet upload and download speeds.