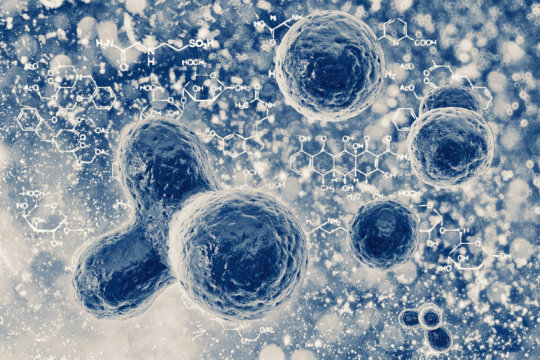 A single chance mutation about a billion years ago caused an ancient protein to evolve a new function essential for multicellularity in animals, according to new research co-led by a University of Chicago scientist. By conducting experiments on ‘resurrected’ ancestral proteins, the researchers shed light on the origin of a molecular process that allows animals to form and maintain organized tissues.

The study, published in the journal eLife on Jan. 7, 2016, is the first to experimentally describe a molecular mechanism involved in the evolution of multicellularity, and it establishes a paradigm for research in evolutionary cell biology and the origins of complex life.

“Our experiments show how biological complexity can evolve though simple, high-probability genetic paths,” said the study’s co-senior author Joe Thornton, PhD, professor of human genetics and ecology and evolution at the University of Chicago. “Before the last common ancestor of all animals, when only single-celled organisms existed on Earth, just one tiny change in DNA sequence caused a protein to switch from its primordial role as an enzyme to a new function that became essential to organize multicellular structures.”

Few events in the history of life on Earth are as significant as the evolution of multicellular animals from single-celled ancestors. Multicellularity depends on a suite of cellular interactions and molecular functions, but almost nothing is known about how those functions evolved.

Thornton and his colleagues focused on a process called mitotic spindle orientation. To form and maintain organized tissues, cells must orient the direction in which they divide relative to their neighbors. In the flat tissues that line organs, for example, cells divide within the plane of the tissue; otherwise, malformations and cancer can result. Cells accomplish this through a structure called the mitotic spindle — a network of protein filaments that pulls freshly duplicated chromosomes to opposite ends of the cell before it splits into two.

In cells from a broad range of animal species, the spindle is rotated relative to surrounding cells by a protein scaffold known as the guanylate kinase protein interaction domain (GK-PID). It acts as a kind of molecular carabiner by binding to two different partner molecules: an ‘anchor’ protein on the inside of the cell membrane that indicates the position of adjacent cells and a motor protein that pulls on mitotic spindle filaments. Once hooked together by GK-PID, the motors pull the chromosomes toward the anchors, orienting new daughter cells in line with neighboring cells.

To study how GK-PID evolved its function as a spindle-orienting carabiner, Thornton and his colleagues used ancestral protein reconstruction — a technique Thornton’s group pioneered — to experimentally retrace the evolution of genes and proteins by working backwards through the tree of life.

Graduate students Doug Anderson and Victor Hanson-Smith first used computational methods to reconstruct the evolutionary histories of GK-PID and a related enzyme known as guanylate kinase (gk). The two proteins share similarities in sequence and structure but have different functions and histories — GK-PID is found in only animals and their closest unicellular relatives, while gk plays a fundamental role in making the components of DNA and is universal to life.

Their analysis revealed that GK-PID evolved when the gene for the gk enzyme duplicated and then began to diverge. This event occurred before animals and their closest unicellular relatives split from other single-celled organisms, roughly a billion years ago. One copy retained its original function, but the other evolved the capacity to serve as a molecular carabiner in spindle orientation.

The team reconstructed the ancient forms of gk and GK-PID to study how this transition occurred. Working backwards from hundreds of present-day species, they used sophisticated computational methods to infer ancestral genetic sequences from the time that the GK-PID first appeared. With study co-leader Ken Prehoda at the University of Oregon, the researchers chemically synthesized the ancestral genes and inserted them into bacterial and insect cells, which produced the proteins as they existed in the distant past.

The most ancient progenitor protein, which existed just before the duplication that produced GK-PID, functioned as an enzyme. But the researchers found that they could recapitulate evolution by introducing a single mutation, which switched the protein’s function, abolishing its enzyme activity and conferring the ability to act as a carabiner that could bind the anchor protein.