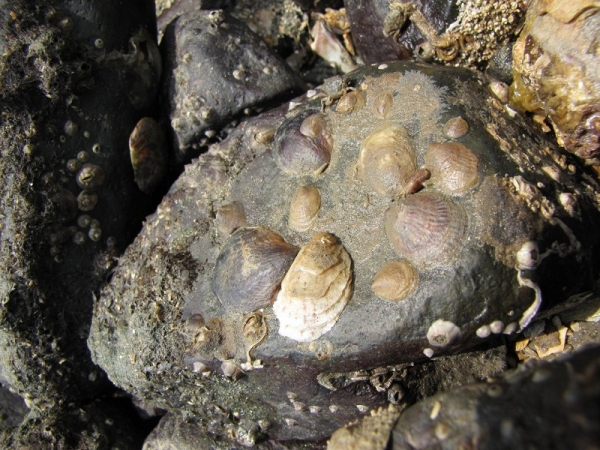 There are several species of animals who change their sex at some point during their lives. You may remember that the plot of Jurassic Park hinges on it. This trait is called sequential hermaphroditism, and it can be spotted in worms, fish, and gastropods. One species of snail, called the slipper limpet (don’t look at me; I didn’t name it), always begins life as male, but at some point, may become female. This week, the Smithsonian Tropical Research Institute announced that it has figured out why.

To understand why it’s so mind-bending that slipper limpets could change from male to female, you have to know a little about their private parts. There’s no easy way to say this: the slipper limpet has, according to the Smithsonian’s unapologetic press release, “a comparatively enormous penis.” The sex organ has to be this long in order for the male to loop it all the way around a female’s shell and sneak up from underneath, annoying every female who’s trying to take a nap.

If a male turns female, that penis has to go somewhere, so it gradually shrivels up and disappears, while at the same time, the body begins to produce female organs. This might all sound rather disturbing and impossible, but remember that all male humans started out female themselves.

What scientists didn’t know until now is that the snails actually turn female only after they rub up against other males. If two males are placed in close proximity, the larger one will immediately begin shape-shifting into female, to accommodate the other. The evolutionary logic at play here is that the larger snail will be able to hold more eggs than the smaller, while size has no effect on sperm production.

So, much like my ex-boyfriend, male snails will be whatever their partner wants them to be. But then two years down the line, you realize they were just doing it to impress you, and that’s not who they really are, and you’re sorry you ever got involved with this … snail.

The news comes as a surprise to researchers, because these animals are slow and have poor vision, so it was long believed that they relied on chemical cues to determine when to change sexes.

“I was blown away by this result,” said co-author Rachel Collin, staff scientist at the Smithsonian. “Slipper snails don’t move around much, so you don’t really think of them having complex reactions to each other, but this study shows that there is more going on there than we thought.”