Sandia National Laboratories Building A Machine That Most Likely Will Possess The Ability Of Thor’s Hammer. 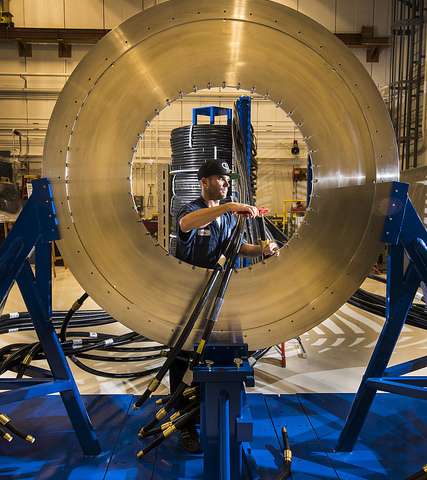 Thor’s mythic hammer, the Mjolnir, harnesses the power of lightning to let loose incredible power on enemies of the Norse god (and more recently, comic book hero). Now, physicists and engineers are working on a more compact version of a huge machine with similar abilities.

There’s no hammer, and it’s nowhere near small enough for a mere mortal — even a Hemsworth — to hold, but it is named Thor and scientists hope it may help unlock the sun’s most powerful secrets.

This Thor is a new, more efficient pulsed-power accelerator that’s being built by Sandia National Laboratories. If you’re not familiar with this type of big bad machine, it stores up electricity in capacitors and then shoots out all that energy in instantaneous pulses to create radiation and high magnetic pressure.

Sandia Labs already has a warehouse-sized pulsed-power accelerator named the Z machine that’s capable of delivering shots with 1,000 times more electricity than a lightning bolt, enough to make even Thor himself jealous. It’s used for a variety of purposes ranging from weapons research to unlocking the potential of fusion energy, the process that powers the sun, which could be the ultimate “green” energy source.

Thor takes the same concepts behind the Z Machine and shrinks it down to one-fifth the physical size while also being 40 times more efficient. In that sense, it’s not all that different from comparing Thor’s more compact, stowable, lightning-powered hammer with his dad Odin’s big spear, Gungnir.

While Sandia’s Thor won’t be able to match the 5 million atmospheres of pressure that the Z Machine can create, it’s still able to lay on a significant squeeze.