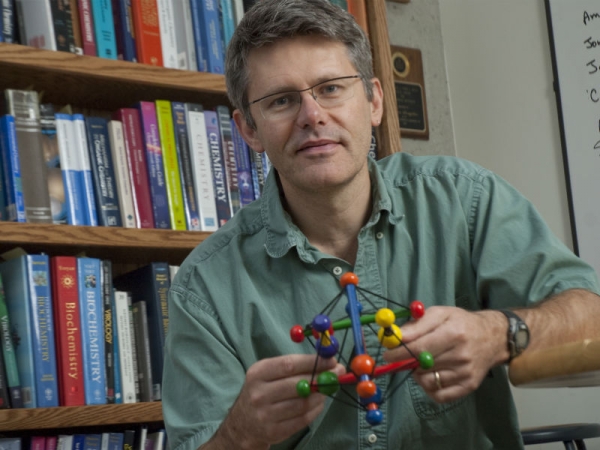 Researchers from Indiana University have developed a highly efficient biomaterial that facilitates the formation of hydrogen, a crucial step in the process of splitting water to produce oxygen and hydrogen for fueling cars running on water.

Known as P22-Hyd, the material is a modified enzyme gaining strength from receiving protection from a protein shell derived from a bacterial virus. Compared to the enzyme’s unaltered form, P22-Hyd is 150 times more efficient. It is developed from combining a virus’ ability to assemble a wide range of genetic building blocks and a sensitive, fragile enzyme that takes in protons and spits out hydrogen gas.

“The end result is a virus-like particle that behaves the same as a highly sophisticated material that catalyzes the production of hydrogen,” said Trevor Douglas, who led the study published in the journal Nature Chemistry.

Hydrogenase, the genetic material used in making the enzyme, is the result of two genes from the Escherichia coli bacteria inserted within a protective capsid from bacteriophage P22. Aside from being more efficient, the resulting P22-Hyd can also be created through a simple fermentation process taking place at room temperature.

Because of its key components, P22-Hyd is more environment-friendly and affordable to produce compared to other materials used in fuel cells. It is comparable in performance with platinum, which is used in high-end concept cars to catalyze hydrogen into fuel, but P22-Hyd is truly renewable.

What’s even more surprising about P22-Hyd is that it does not only break the chemical bonds holding water together, but it can also reverse the process and recombine oxygen and hydrogen to produce energy. This means that the enzyme can be used as a catalyst for both fuel cells and for hydrogen production.