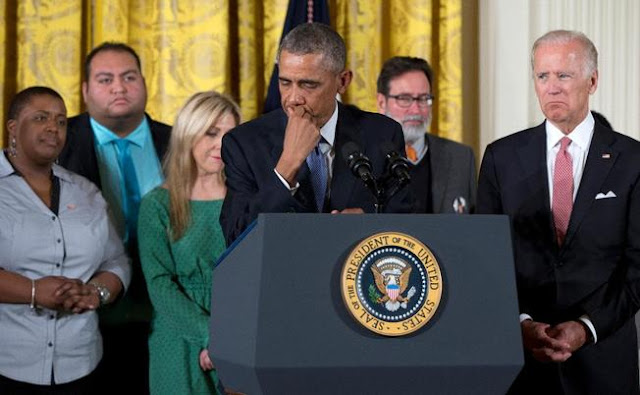 President Barack Obama is flexing his executive muscle, ordering the federal government to study how smart guns could stem violence.

In a memorandum Monday, the president told the departments of Defense, Justice and Homeland Security to look into smart gun technology, such as fingerprint and radio-frequency identification. The goals are to track lost or stolen guns and to prevent accidental gunfire.

The agencies have 90 days to compile recommendations.

The Obama memo comes a month after a couple influenced by radical Islamic beliefs fatally shot 14 people in San Bernardino, California, raising concerns about public safety. Gun sales rose sharply amid fear of extremists after the December 2 shooting, the Obama administration said in a briefing over the weekend.

On Tuesday, Obama outlined the memo and other executive actions he took during a tearful speech at the White House where he implored the nation to have a “sense of urgency” to tackle gun violence. He recalled the 2012 shooting at Sandy Hook Elementary School in Connecticut that left 20 children and six teachers dead.

“Every time I think about those kids, it gets me mad,” Obama said, wiping away tears. “And by the way, it happens on the streets of Chicago every day.”

Obama further plans to address gun violence during a nationally televised town hall meeting at George Mason University in Virginia on Thursday night. On Monday, the president consulted with Attorney General Loretta Lynch on which executive orders he could use for more gun restrictions.