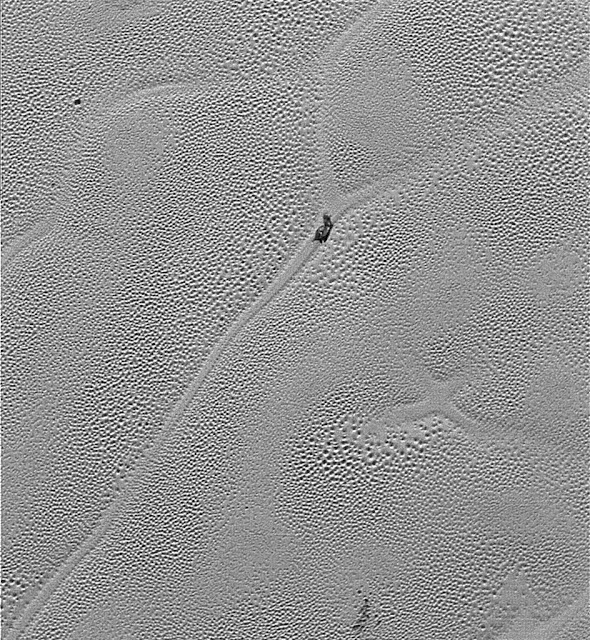 Dwarf planet Pluto and fictional superspy Austin Powers have something in common. They’re both into lava lamp action. NASA just released a fascinating new image of Pluto as seen by the New Horizons spacecraft. It covers a close-up look at a section of the dwarf planet’s surface which, from afar, looks a bit like the finely pockmarked skin of an orange.

The photo covers an area that’s part of an icy plain known informally as Sputnik Planum, a nod to the groundbreaking Russian satellite Sputnik that launched back in 1957. New Horizons transmitted the image back to Earth on December 24 and NASA released it on Thursday.

NASA puts the pitted surface into perspective: “Its surface is separated into cells or polygons 10 to 25 miles (16 to 40 kilometers) wide, and when viewed at low sun angles (with visible shadows), the cells are seen to have slightly raised centers and ridged margins, with about 100 yards (100 meters) of overall height variation.”

You can imagine standing on the surface in Sputnik Planum. These features would look pretty substantial up close and in person.

The explanation for the unusual look involves some interesting behavior from the nitrogen-heavy ice. Pluto generates some internal heat, which warms the ice, causing it to rise to the surface in what NASA describes as “great blobs.” Once there, it cools and then sinks back downward toward the dwarf planet’s warmth.