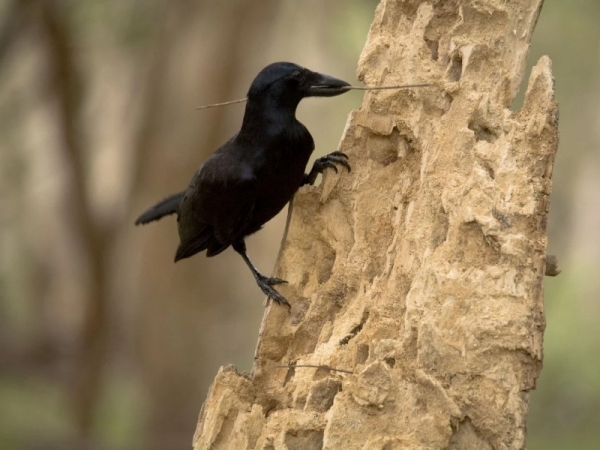 There are only two animals on Earth that are known to use tools shaped like hooks — humans, and New Caledonian crows. Now, for the first time, cameras have captured the birds using those tools.

Crows exist all over the world, but the crows in New Caledonia, an island in the South Pacific, are known for their tool-making abilities. For example, they fashion sticks into small, sharp spears, which they use to “fish” for larvae in dead wood.

“We’d seen it before and other researchers had seen it, but nobody had managed to shoot any videos,” said Christian Rutz, an ecologist at the University of St. Andrews in Scotland, in Biology Letters. “Some people think you need a large brain to use tools. These crows disprove that. They show incredibly complex tool behavior. The big question is: Why and how? What is special about the crows on this island?”

Of course, crows aren’t the only birds to use tools. The Galapagos woodpecker is known to use cactus spines to hunt for insects, for example. The New Caledonian crow, however, is the only bird that is known to fashion tools itself, giving the bird access to food sources that it otherwise wouldn’t be able to reach.

Difficult terrain in New Caledonia has made it hard for researchers to observe the birds directly, and researchers that have tried said that the crows are so curious that they started observing researchers rather than the other way around. To get around this, the researchers created a camera that could be attached to the underside of the bird’s tail feathers. The footage captured by these cameras was then sent back to field workers; however, the researchers kept losing reception. So, instead of transmitting the data, they used microSD cards into the cameras, so footage could be saved directly on the device.

The plan is to retrieve the cameras after they had let the birds fly away. They used pieces of cheap party balloons to attach the cameras. After around a week, the balloon pieces degraded, and the cameras simply fell off the birds. Researchers then used radio transmitters to find the cameras and observe the footage.