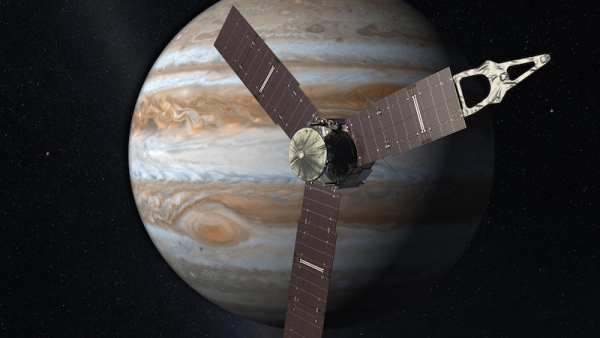 On its way to explore Jupiter, a NASA probe has set a new record to become the furthest traveling solar-powered spacecraft.

NASA announced that Jupiter’s probe Juno broke the distance record on Wednesday, Jan. 13, when the spacecraft was about 493 million miles from the sun at 2 p.m. EST.

The solar-powered spacecraft record was previously credited to the European Space Agency’s Rosetta mission when it reached 492 million miles from the sun in October 2012 as it made its way to the comet 67P/Churyumov-Gerasimenko.

Juno first launched in 2011, and is expected to reach Jupiter on July 4 of this year where it will then orbit the planet 33 times. The solar-powered spacecraft will study Jupiter’s aurorae with the goal to find out more about the planet’s origin, composition, atmosphere, magnetic and gravitational fields.

The spacecraft weighs in at 4 tons and carries 30-foot-long solar arrays that have 18,698 individual solar cells, which would be able to generate about 14 kilowatts of electricity at Earth’s distance from the sun. This probe is going five times that distance.

“Jupiter is five times farther from the sun than Earth, and the sunlight that reaches that far out packs 25 times less punch,” Rick Nybakken, Juno’s project manager from NASA’s Jet Propulsion Laboratory, said. “While our massive solar arrays will be generating only 500 watts when we are at Jupiter, Juno is very efficiently designed, and it will be more than enough to get the job done.”