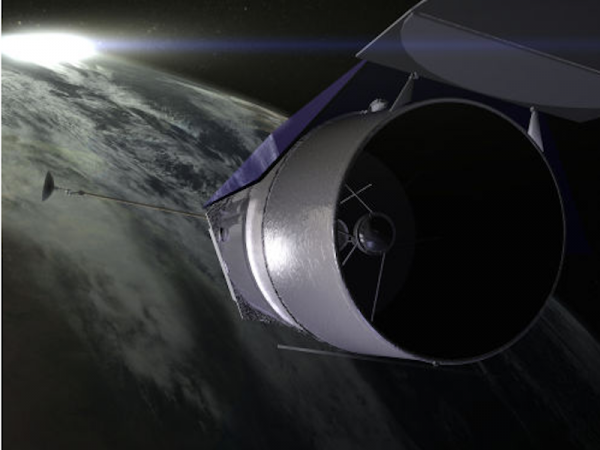 A U.S. spy satellite built to spy on the dark secrets of the Russians is being repurposed for a new, peaceful mission: To probe the universe in the search for elusive dark energy.

The powerful spy satellite, built by the National Reconnaissance Office, was donated to NASA in 2012 when the NRO determined it was no longer needed.

With new funding from Congress, NASA has decided to accelerate a program to turn the satellite into a space telescope to answer some fundamental questions about the universe and its makeup, officials say.

The Wide-Field Infrared Survey Telescope (WFIRST) program will begin this year instead of in 2017, says Paul Hertz, director of the space agency’s astrophysics division.

With a 2.4-meter mirror the same size as the one in the Hubble Space Telescope, WFIRST will gather light from almost 400 million galaxies and 2,600 exoplanets during a mission set to run for 6 years, NASA says.

It will feature adaptive optics and wide-field imaging, allowing it to have 100 times the observing capabilities of the Hubble, agency scientists say.

A single WFIRST image will uncover millions of galaxies, far surpassing what Hubble has been capable of, they note.

“For example, where Hubble has found only a few galaxies within 500 million years of the Big Bang, we now know (from Hubble) that WFIRST will find hundreds of these rare objects,” NASA says on the mission’s website.

WFIRST is “designed to settle essential questions in the areas of dark energy, exoplanets, and infrared astrophysics,” the agency says.

Although it will not launch until around 2024, 6 years after the scheduled launch of the much more powerful James Webb Space Telescope, WFIRST can fill a valuable niche by embarking on a search for dark energy, it says.

Dark energy is at the center of current theoretical model of how the universe works, accounting for the observed acceleration of the universe’s expansion.

Indirect evidence of dark energy has been detected but it has never been directly identified, while scientists assume that three-quarters of the universe is made up of dark energy and its counterpart, dark matter.

WFIRST will also carry an instrument known as a coronagraph, capable of directly imaging distant gas giant exoplanets, another goal of its mission.