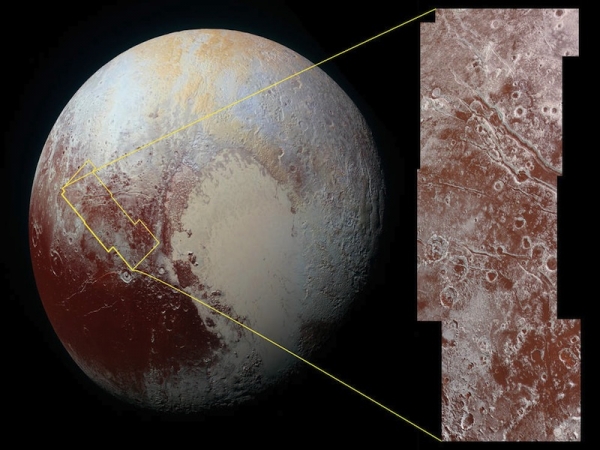 New Horizons used data from two instruments, including the its Long Range Reconnaissance Imager (Lorri) to take pictures from a range of about 31,000 miles on July 14, 2015, and the Ralph/Multispectral Visible Imaging Camera (MVIC), which enhanced the color photo approximately 20 minutes after the photos were taken. MVIC did so at a range of 21,000 miles and at a resolution of about 2,100 feet per pixel.

The result is a composite image of 160 milieus across of Pluto’s Viking Terra area.

The photo shows bright methane ices that are located on many rims of the planet’s craters. The image shows a collection of small, red soot-like particles called tholins that are created from methane and nitrogen reactions. The viewer can see where this red material appears thick. Scientists believe the particles are riding along with the ice that is flowing underneath.

Lorri also transmitted back a high-resolution image on Dec. 24 that shows the icy plain known as Sputnik Planum that forms to the left side of the dwarf planet’s “heart.”

The images were also taken during its July 14 flyby when New Horizons was at its closet approach to the planet. The photos were taken with resolutions of about 250 to 280 feet per pixel and show off the planet’s icy plains.

The image focuses on a strip of 50 miles wide and more than 400 miles long from the northwestern shoreline of Sputnik Planum and its surrounding plains.

The surface of this area shows a change in its composition, with scientists believing the darker blocks are probably icebergs that are floating in denser solid nitrogen.