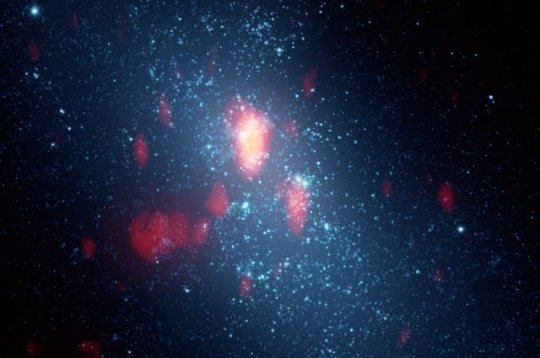 More than a million young stars are forming in a hot, dusty cloud of molecular gases in a tiny galaxy near our own, an international team of astronomers has discovered.
The star cluster is buried within a supernebula in a dwarf galaxy known as NGC 5253, in the constellation Centaurus. The cluster has one billion times the luminosity of our sun, but is invisible in ordinary light, hidden by its own hot gases.

“We are stardust, and this cluster is a factory of stars and soot,” said Jean Turner, a professor of physics and astronomy in the UCLA College and lead author of the research, which is published March 19 in the journal Nature. “We are seeing the dust that the stars have created. Normally when we look at a star cluster, the stars long ago dispersed all their gas and dust, but in this cluster, we see the dust.

“I’ve been searching for the gas cloud that is forming the supernebula and its star cluster for years,” she said. “Now we have detected it.”

The amount of dust surrounding the stars is extraordinary — approximately 15,000 times the mass of our sun in elements such as carbon and oxygen.

“We were stunned,” said Turner, who is chair of the department of physics and astronomy.
The cluster is about 3 million years old, which in astronomical terms, is remarkably young. It is likely to live for more than a billion years, she said.

The Milky Way has not formed gigantic star clusters for billions of years, Turner said. It is still forming new stars, but not in nearly such large numbers, she said. Some astronomers had believed that such giant star clusters could form only in the early universe.

The Milky Way has gas clouds, but nothing comparable to this galaxy’s Cloud D — see the bright white area in the photo — which houses the enormous star cluster enshrouded in thick gas and dust, Turner said.

How much of a gas cloud gets turned into stars varies in different parts of the universe. In the Milky Way, the rate for gas clouds the size of Cloud D is less than 5 percent. In Cloud D, the rate is at least 10 times higher, and perhaps much more.

Turner and her colleagues conducted the research with the Submillimeter Array, a joint project of the Smithsonian Astrophysical Observatory and the Academia Sinica Institute of Astronomy and Astrophysics, on Hawaii’s Mauna Kea.

NGC 5253 has hundreds of large star clusters, including at least several that are young, the astronomers report. The most spectacular is found within Cloud D.