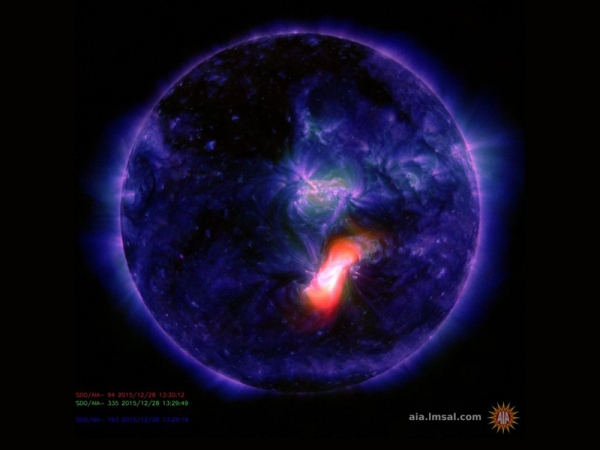 On Dec. 28, a solar flare blasted directly toward Earth and is expected to hit the planet in the wee hours of Dec. 30 or Dec. 31. According to the Space Weather Prediction Center, the effects of this solar flare may last until the New Year.

In the wake of a massive solar storm, those in luck may see the northern lights dancing in the night sky. People who live in high-altitude places and in northern states, including Oregon and Illinois, are most likely to see the aurora borealis.

“Minnesota certainly would have a shot at it, assuming that it remains strong enough through the evening into the night,” said National Oceanic and Atmospheric Administration physicist Terry Onsager.

The aurora borealis could also be seen in the Bay Area.

“It depends entirely on the strength of the storm. If it turns out to be stronger than that, it could be seen,” says Onsager.

However, despite the breathtaking beauty of the northern lights, scientists said massive geomagnetic storms can cause different widespread disruptions.

What Happens During A Solar Storm

A solar or geomagnetic storm occurs when there is an efficient exchange of energy between the solar wind and the Earth’s atmosphere.

In this case, a sunspot cluster erupted and flashed an M-class flare toward the Earth, which is not as strong as an X-class flare. The solar flare triggered a coronal mass ejection that could hit the planet on Thursday.

Tony Phillips of NASA explains that sunspot AR2374 has some unstable ‘beta-gamma’ magnetic field that could have also exploded hours after solar flares blasted on Monday. Forecasters from NOAA estimates a 55 percent chance of additional M-class flares and a 10 percent chance of X-flares.