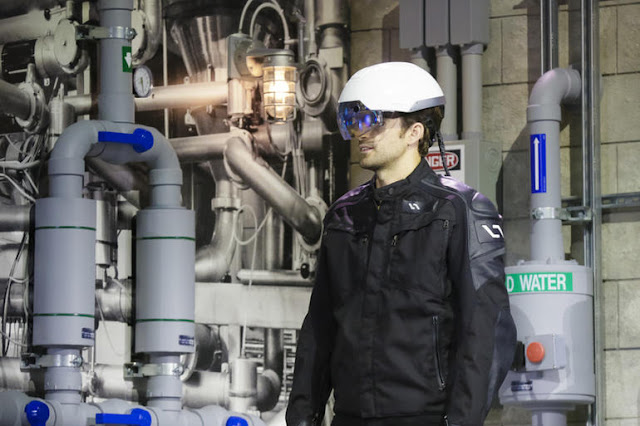 Intel may have raced passed Microsoft to the augmented reality world.

The chip giant used its keynote address at the Consumer Electronics Show to unveil the Daqri Smart Helmet, a hardhat developed by Daqri that uses Intel’s RealSense 3D camera to offer a form of augmented reality — technology that overlays computer images on the real world. Microsoft has generated a lot of attention for its focus on AR with its HoloLens, which has only seen limited demos.

Powered by Intel’s M7 chip and RealSense, Daqri’s helmet brings it into the much-hyped market for virtual and augmented reality, which promises to take you to new worlds or add to your existing one through sophisticated head gear. It’s an area that’s attracted nearly ever major company in the tech industry, be it a phone maker like Samsung, a tech giant like Microsoft or an Internet company like Google and Facebook.

Intel is focused on augmented reality. The company showed off a kind of X-ray vision by letting a worker see through pipes that might be faulty, which can be picked up by its RealSense camera. The helmet could also be used to give workers digital directions on top of what they’re looking at when doing manual labor.

It’s one of the key examples Microsoft showed off with its own HoloLens gear. For its part, Microsoft intends to use the HoloLens for many different purposes, ranging from work to games and entertainment. The Daqri helmet is intended for the workplace.