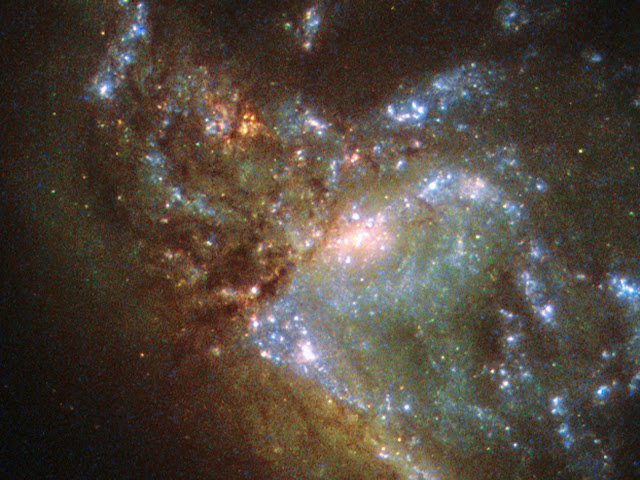 The Hubble Space Telescope captures a fascinating sight: two galaxies in the process of merging into one new structure.


The Wide Field Planetary Camera 2 (WFPC2) of the space telescope – a joint project between NASA and European Space Agency – captured and showed an image of galaxy NGC 6052, situated in the constellation of Hercules about 230 million light years away.


Although appearing as an “abnormal” galaxy, NGC 6052 is actually a single body resulting from an intergalactic crash.


“[I]t is in fact a ‘new’ galaxy in the process of forming. Two separate galaxies have been gradually drawn together, attracted by gravity, and have collided. We now see them merging into a single structure,” ESA described the galactic display.


When Two Galaxies Get Married


What happens during the merging process?


Individual stars, thrown out of their original orbits, are positioned onto completely new paths that can be very far from the place of collision. Since they give off light, as shown in the image, the forming galaxy exhibits a rather chaotic shape.


The new galaxy will eventually form a stable shape, which could be far from the appearance of the two separate galaxies.


WFPC2, Hubble’s workhouse camera for a number of years, records images to 48 color filters that cover the spectrum of far-ultraviolet to visible and near-infrared wavelengths.


At its center is an L-shaped trio of wide-field sensors as well as a smaller yet high-resolution camera positioned at the remaining corner of the square.


According to ESA, WFPC2 was the most utilized instrument in the first years of the Hubble. It was replaced by WFC3 in 2009 during Servicing Mission 4 and, alongside its predecessor WFPC1, was afterwards displayed at the National Air and Space Museum in Washington D.C.


Latest sightings made by the Hubble telescope include the first ever predicted supernova explosion back in early December.


Refsdal supernova, named after Norwegian astronomer Sjur Refsdal, is located in the galaxy cluster MACS J1149.5+2223. Its explosion is the first time a supernova in action was witnessed, and the event was even forecasted.


Scientists has been regularly looking at the galaxy cluster through the Hubble’s telescope in hopes of seeing the reoccurrence of the explosion that took place almost 10 billion years ago. It finally imaged the predicted rerun of the stellar explosion on Dec. 11.


Hubble is the first major optical telescope placed in space, with an unobstructed view to provide scientists visibility of the most distant stars, galaxies and planets in the solar system. Instead of traveling to these remote areas in the universe, it takes the images of heavenly bodies as it whirls around planet Earth at around 17,000 mph.


Since its launch in April 1990, the telescope is one of the most hardworking instruments to date, having made over 1.2 million observations and spawned more than 12,800 scientific papers.


Learn more facts and trivia about the Hubble Space Telescope from NASA.