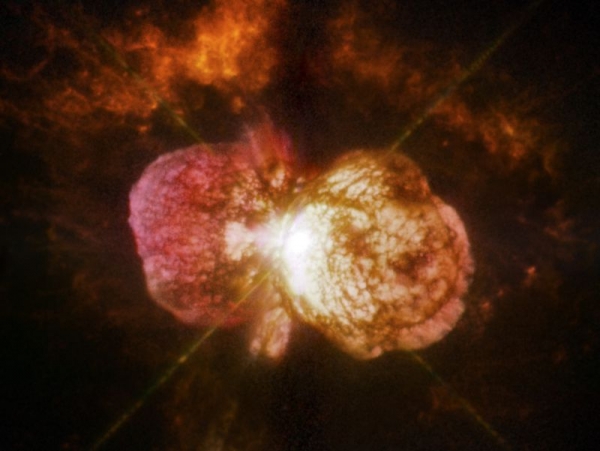 Eta Carinae is the biggest and brightest stellar system within 10,000 light-years in our galaxy. In the mid-19th century, a massive explosion took place within Eta Carinae, which launched a huge mass into space, approximately 10 times the sun’s mass.

The explosion resulted in a “veil-like” shroud of dust and gas, which makes Eta Carinae a one-of-a-kind object in the galaxy. A recent analysis of NASA’s archival data from the Hubble and Spitzer telescopes revealed Eta Carinae isn’t so unique after all. The U.S. space agency found five other stellar objects in other galaxies with the same properties.

“The most massive stars are always rare, but they have tremendous impact on the chemical and physical evolution of their host galaxy,” explained lead scientist Rubab Khan, NASA’s Goddard Space Flight Center postdoctoral researcher. These enormous stars create and dispense high amounts of chemical elements that are crucial to their life. Eventually, the massive stars erupt as supernovas.

The Massive And Luminous Eta Carinae

Eta Carinae can be found 7,500 light-years away from the Carina constellation. It is so bright that it outshines our galaxy’s sun by approximately 5 million times.

Its binary system is made up of two enormous stars. The bigger one is roughly 90 times bigger than the sun’s mass and the smaller one is a little beyond 30 solar masses.

Eta Carinae is the nearest stellar site for scientists to study high-mass stars, the eruptions and how they are related to the development of massive stars. It is very difficult to catch unique stars after a major eruption, which is often short-lived.

Following the stellar system’s great eruption in the 1840s, researchers needed more examples of the same stellar objects to understand the occurrence. Prior to Khan’s research, nothing has ever matched Eta Carinae’s descriptions.