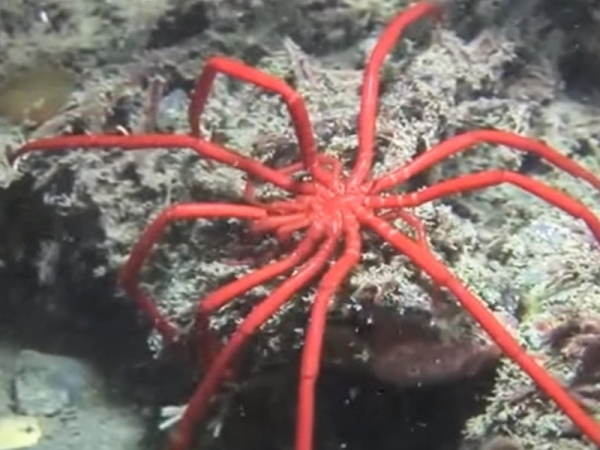 The itsy-bitsy spider is not so itsy-bitsy anymore. Or at least, its counterpart under the sea isn’t.

With a bright orange body, eight gangling legs, and an elongated proboscis, the sea spider prefers to lurk in the cold waters of both the Antarctic and Arctic oceans. Under these dark waters, the sea spider grows massive, with each of its eight legs sprouting to span the width of a person’s face.

Technically, pycnogonids are not true spiders or arachnids, but their classification as chelicerates somehow place them closer to one another.

Are Pycnogonids Becoming Mutant Spiders? No One Knows – Yet

Pycnogonids are usually small and cryptic. Because of their thin legs and diminutive size, these sea spiders need no respiratory system. Their proboscis allows them to suck out nutrients from invertebrates.

However, tiny sea spiders in Antarctica have somehow gotten bigger, growing up to 25 centimeters or 9 inches. Scientists say the growth is due to the phenomenon called “polar gigantism.”

Strangely enough, pycnogonids are not the only ones that grow into unusual sizes. Echinoderms, copepods, and certain mollusks have all grown larger than their equatorial relatives.

The occurrence is a mystery for scientists. Multiple hypotheses have attempted to explain why and how polar gigantism happens, but none of these have been proven yet.

A team of researchers from the National Science Foundation, the University of Montana, the University of Hawaii at Manoa, and the United States Antarctic Program believe that by studying and examining Antarctic pycnogonids, the answer to this strange phenomenon may be unraveled.