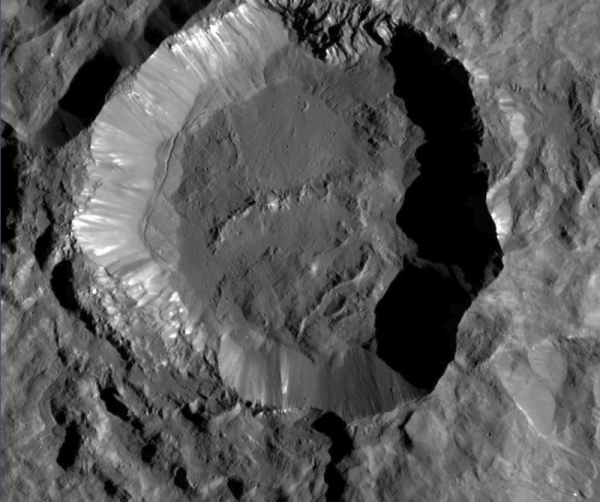 Ceres, the dwarf planet whose mysterious bright spots have held the public’s attention, is revealing some of its secrets in the most recent images from NASA’s Dawn spacecraft.

The space agency has released dramatic new images, captured as the Dawn probe made its closest orbit above the surface of Ceres, passing over it as just 240 miles away.

Taken during four days in December, the images highlight the Kupalo Crater, one of the tiny world’s youngest.

Bright material exposed on the crater’s rim could be salt, and could be related to the “bright spots” seen in earlier images of Ceres, which researchers suspect are large salt deposits.

“This crater and its recently-formed deposits will be a prime target of study for the team as Dawn continues to explore Ceres in its final mapping phase,” says mission science team member Paul Schenk at the Lunar and Planetary Institute in Houston.

Another crater featured in the new images, Dantu Crater, shows fractures on its 78-mile-wide floor, similar to what are seen on our moon in the large young crater known as Tycho, researchers noted.

The cracking may be the result of cooling of materials melted by the impact, or the crater floor may have experienced uplifting after the forming of the crater, they suggest.

The Dawn spacecraft launched in 2007, headed to two solar system targets: Vesta and Ceres, to two larger objects orbiting in the asteroid belt that lie between Mars and Jupiter.