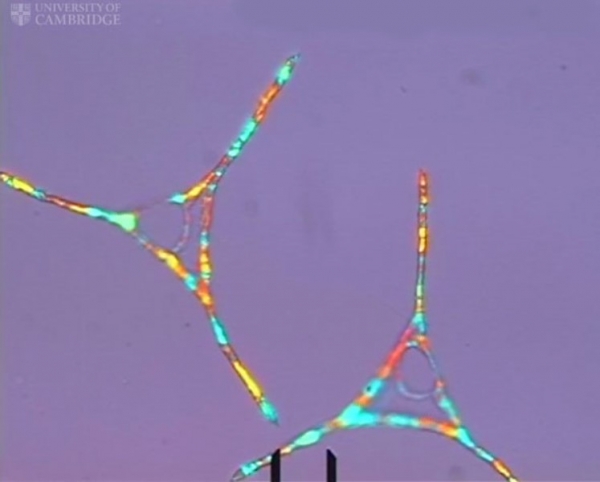 These chemicals’ shapes change on the fly – they can form triangles and other shapes when frozen, and revert to their original state once warmed back up, and they may hold the key to the development of ever-changing materials.

Contrary to previously thought, forms in nature could also develop based on the physical properties of material.

These are the findings of new study from University of Cambridge and Bulgaria’s Sofia University researchers, who reported the results in the journal Nature and highlighted the research’s potential use in creating paints, personal and household products, and pharmaceuticals.

“There are many ways that non-biological things take shape,” said study lead Dr Stoyan Smoukov from Cambridge, seeking to know what drives the process, how to control it, and the links between the process in biological and artificial realms.

Through freezing oil droplets while in a soapy solution, the researchers found that the droplets shifted shapes, from triangles and octagons to hexagons and fibers. The chemicals can return to their original shape once the solution is re-warmed.

Previous techniques to create the same complex shapes were highly controllable yet lacked efficiency in the amount of material utilized or required expensive equipment.

The Matter of Morphogenesis

What could be driving this process known as morphogenesis?

This process is known in animals to control cell distribution during embryonic development as well as play a role in mature animal processes such as tumor growth. Alan Turing proposed in the 1950s that it is driven by reaction diffusion, where local chemical reactions lead substance spread through a given space.

According to recent studies, though, it is materials’ physical properties that control morphogenesis – possible anticipated by Turing but unlikely to be determined with the computer systems of his time.