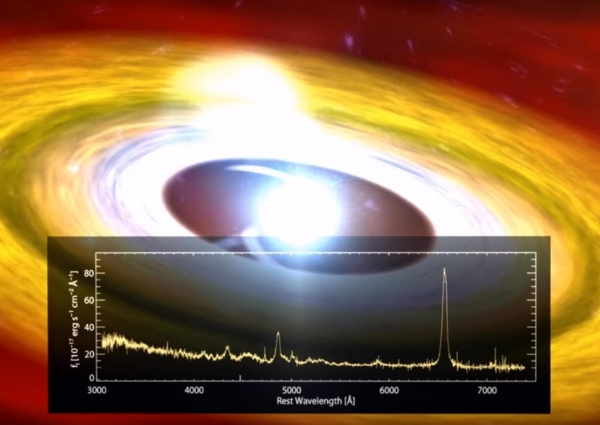 Scientists with the Sloan Digital Sky Survey (SDSS) proclaimed on Friday, Jan. 8 that a quasar is running on empty after a black hole sucked up all of the star’s gas. The news comes just days after NASA announced that another black hole belched.

The researchers had been observing the quasar, SDSS J1011+5442, for about a decade, watching as its black hole heart absorbed the gas that kept the star lit. The quasar’s changing emission over 12 years was “stunning,” remarked Penn State University’s Michael Eracleous, an astrophysicist.

“The luminosity of the gas declined by over a factor of 50; if we had taken our first observations of the quasar today, we would view it as a typical galaxy with no suggestion that it hosted a supermassive black hole,” said Eracleous.

The SSDS’s Time-Domain Spectroscopic Survey (TDSS) discovered the quasar back in 2003 and it was the survey’s first major finding. During the star’s final decade, scientists observed a 50-fold dip in brightness.

Everyone has grown used to “thinking of the sky as unchanging,” stated the University of Washington’s Scott Anderson, principal investigator of TDSS.

“The SDSS gives us a great opportunity to see that change as it happens. In fact, we found this quasar because we went back to study thousands of quasars seen before,” Anderson said. “This discovery was only possible because the SDSS is so deep and has continued so long.”

“Essentially, it has run out of food, at least for the moment,” said Runnoe. “We were fortunate to catch it before and after.”