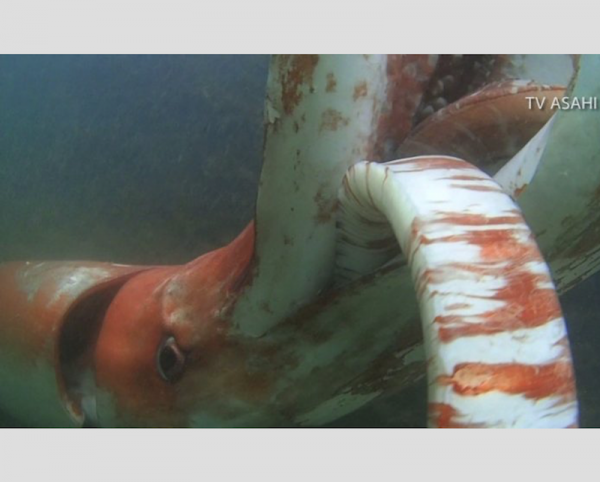 A giant squid was seen far from its usual deep-sea haunts when it wandered into a bay in Japan, offering an unusual sighting of the unique and elusive species.

People enjoying a Christmas Eve stroll on a pier in Toyama Bay witnessed the creature swimming near the surface and passing under anchored fishing boats. Toyama Bay, one of Japan’s largest bays, is on the Sea of Japan on the northwestern side of the main island of Honshu.

The squid spent several hours gliding around the harbor’s waters before heading back to the open sea, witnesses said.

Experts said the squid, around 12 feet long, was probably a juvenile example of the species Architeuthis dux, which can grow to 40 feet in length.

A diver, Akinobu Kimura, was able to capture video of the squid using a submersible camera.

“My curiosity was way bigger than fear, so I jumped into the water and go close to it,” said Kimura, owner of a local dive shop.

“This squid was not damaged and looked lively, spurting ink and trying to entangle his tentacles around me,” he said. “I guided the squid toward to the ocean, several hundred meters from the area it was found in, and it disappeared into the deep sea.”

Giant squid, deep-water denizens, are rarely seen, although they can be trapped in fishing nets.

Sixteen were trapped in this manner in last year’s fishing season, which lasts from November through March.