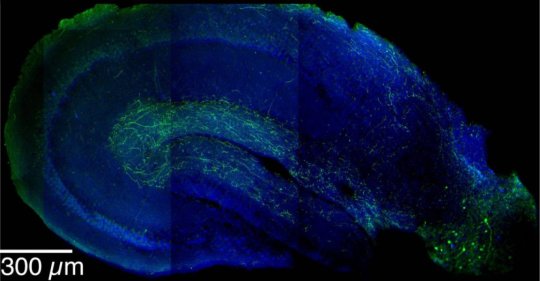 Researchers at Columbia University’s Mortimer B. Zuckerman Mind Brain Behavior Institute and the Department of Neuroscience at Columbia University Medical Center (CUMC) have identified a cellular circuit that helps the mouse brain to remember which environments are safe, and which are harmful. Their study also reveals what can happen when that circuitry is disrupted–and may offer new insight into the treatment of conditions such as posttraumatic stress, panic and anxiety disorders.

The researchers published their findings today in the journal Science.

Learning and memory are among the brain’s most fundamental tools for survival. Accurate encoding of ‘contextual’ memories–those associated with particular experiences–enables us to exhibit the appropriate fear responses and, importantly, avoid dangerous situations. Of equal importance is the brain’s ability to discriminate between an environment that it has previously learned to be dangerous and one that is safe.

Earlier research demonstrated that contextual memories are formed and stored in two interconnected brain regions: the hippocampus and the entorhinal cortex, which are involved in memory and navigation. These two regions are linked via a complex network of brain cells, or neurons. Although scientists have been able to determine how most of this network operates, one connection has remained puzzling.

“Neurons in the entorhinal cortex wind their way into the hippocampus via two distinct routes, or pathways,” explained Jayeeta Basu, PhD, an assistant professor in neuroscience and physiology at the NYU Neuroscience Institute. Dr. Basu was this study’s first author and is a former postdoctoral fellow in the laboratory of Steven Siegelbaum, PhD, at CUMC. “It is thought that contextual memories are formed when these two pathways became activated as part of a carefully timed sequence. But a few years ago, scientists discovered a third pathway that linked the two regions whose purpose was unknown.”

About 80% of neurons in the brain are excitatory–meaning that they carry communications long distances across brain regions, while the other 20% are inhibitory. These inhibitory neurons act locally to slow or halt the excitatory activity–much like tapping the brake pedal after a period of acceleration. What was so unusual about the neurons in this recently discovered third pathway was that they acted across a relatively long distance, but were also inhibitory. So scientists called them long-range inhibitory projections, or LRIPs.

The purpose of this study was to investigate the role these LRIPs may play in learning and memory. First, the researchers temporarily silenced them in the mouse brains. Then, the mice were placed in a room where they were given a brief but aversive footshock. When returned to the same room 24 hours later, the mice remembered the shock and exhibited a fear response, indicating that LRIPs were not required for the formation of fearful memories.