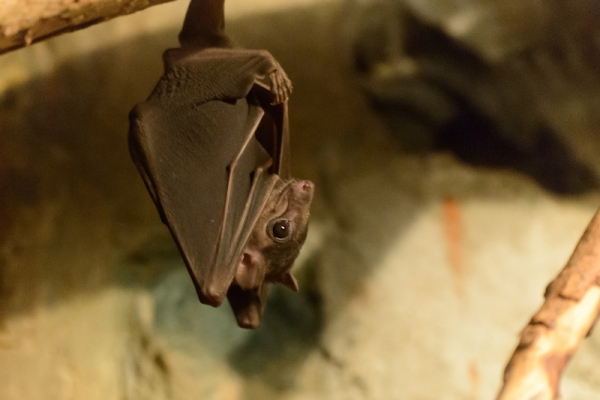 Even the biggest Dracula fan might not know this obscure bat fat: the flying mammals have incredibly heavy wings for their bodies, outweighing birds’ and insects’ flappers. This week, researchers from Brown University released research proposing a purpose for those unusually large wings. They say that bats use them to land upside down.

“Bats land in a unique way,” said Sharon Swartz, a biologist who is a senior author of the new research, in a press release. “They have to go from flying with their heads forward to executing an acrobatic maneuver that puts them head down and feet up. No other flying animal lands the same way as bats do.”

Bats land and rest upside down in order to protect themselves from predators (hanging animals are harder to see from above) and to make it incredibly easy for them to take off at a microsecond’s notice. Unlike birds, who have to pump their wings to gain the momentum to take off, bats can propel forward by essentially falling into flight. But rather than land upright and swing down, which would take enormous digital strength and potentially waste energy, the animals land upside down to begin with. Until now, their ability to make this happen has been a mystery.

To unlock the animals’ secret, researchers trained bats to fly into an enclosure and land on a small piece of mesh, tacked to the ceiling. Then they video-taped their subjects with high-speed cameras, and watched them land, frame by frame. They noticed that as they land, they are not moving quickly at all, which seems counterintuitive; for most animals, flying upright, and then landing upside down would require significant speed so the animal could reorient herself. But the bats, instead, were carefully slowing down as they approached their perches.