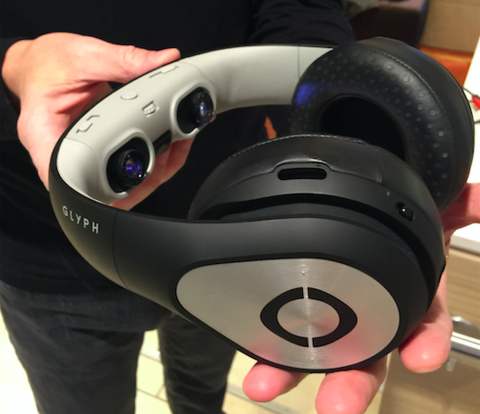 Avegant is showcasing its new product at the Consumer Electronics Show in Las Vegas this week. Originally backed by Kickstarter, the startup is releasing its Glyph media player that doubles as a headset.

Equipped with 3D capabilities, the wearable device can connect to a computer or smartphone via an HDMI connector, displaying movies and the Internet on a private viewing screen. When turned to its side, the product can be used as headphones.

TechCrunch spoke with Richard Kerris, chief marketing officer at Avegant. With the Glyph, people can watch “anything you want, anywhere you want.” Kerris spoke of watching movies and checking email with privacy on a plane.

The screen is made with Gorrilla Glass and uses “a million mirrors per eye reflecting,” says Kerris.

Pre-orders begin this month, with the Glyph available for $599 until the 15th. After that, it will retail for $699.