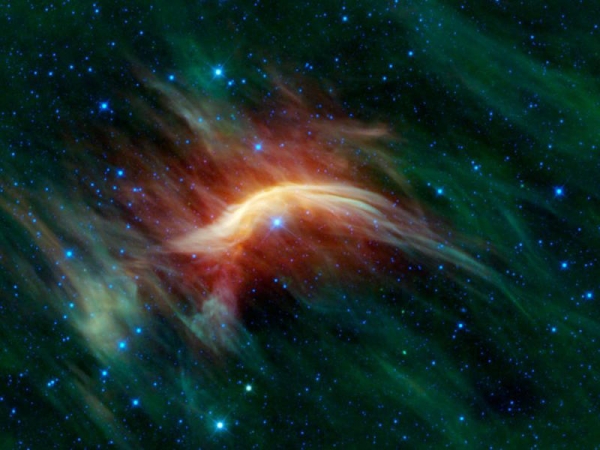 Astronomers say they’ve detected dozens of runaway stars in the Milky Way by capturing images of their bow waves, created as they shove an immense cloud of superheated gas ahead of them while charging through space.

That shock wave creates a brilliantly lighted arc that astronomers have used to identify dozens of the fugitive stars.

Flung out of their own cosmic neighborhood by stellar explosions or by gravity, they can travel at speeds higher than 18 miles per second in relation to their surrounding, astronomers say.

“Some stars get the boot when their companion star explodes in a supernova, and others can get kicked out of crowded star clusters,” says doctoral student William Chick from the University of Wyoming in Laramie.

“The gravitational boost increases a star’s speed relative to other stars,” he explained in presenting a new study at an American Astronomical Society meeting in Florida.

The size and shape of the bow shock depends on both the speed and mass of a runway star, the researchers say.

As an example they cite the massive star Zeta Ophiuchi, possessing a stunning bow shock as it travels through the galaxy at 54,000 mph.

Surveying the images for the telltale curved red clouds seen in the infrared wavelengths, they say they identified more than 200 candidate bow waves.