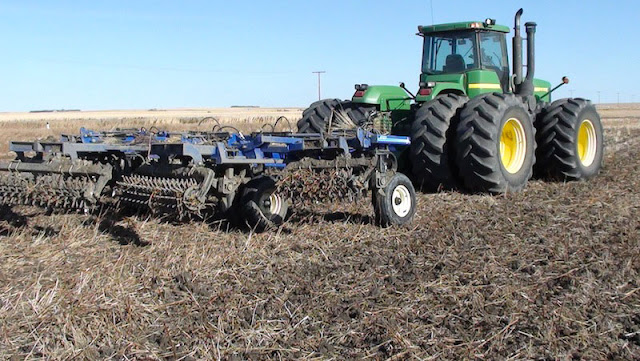 Tillage is the agricultural preparation of land or soil by mechanized tools such as overturning and digging whereby the land is used for growing crops. Examples of human-powered tilling methods hand-tools are picking, hoeing, and mattock work. Examples of mechanized or animal-powered work are harrowing, ploughing, rototilling. The purposes of tillage are soil clods breaking and suppressing in soil, eradication of weed and leveling of soil. Tillage is classified into two types which are
1. Primary Tillage
2. Secondary Tillage
Primary tillage such as rototilling or ploughing tends to produce a rough surface after finishing the work, while Secondary tillage tends to produce a smooth surface which is very suitable for planting.
Tillage System
1. Intensive Tillage System
2. Reduced Tillage System
3. Conservation Tillage System
1. Intensive Tillage System: It is also referred to as Conventional Tillage System. This is a tillage system using cultivation as the major means of seedbed preparation and weed control
2. Reduced Tillage System: This is a tillage system that involves any farming practice which involves fewer cultivation’s than used in conventional fallowing. Conventional fallowing is where stubble is burnt or grazed and weeds are controlled by cultivation.
3. Conservation Tillage System: This is a tillage system that involves any method of soil cultivation that leaves the previous year’s crop residue (such as corn stalks or wheat stubble) on fields before and after planting the next crop, to reduce soil erosion and runoff.
Effect of Tillage
1. Percentage residue is used to compare tillage systems because the amount of crop residue affects the soil loss due to erosion.
2. The type of implement makes the most difference, although other factors can have an effect.
3. Helps mix harvest residue, organic matter (humus), and nutrients evenly into the soil.
4. Decreases the water infiltration rate of soil.
5. Eutrophication – the ecosystem’s response to the addition of artificial or natural nutrients like phosphates via sewage to an aquatic system.
Advantages of Tillage
1. Loosens and aerates the top layer of soil, which facilitates planting the crop.
2. Mechanically destroys unwanted weeds.
3. Dries the soil before seeding.
4. When done in autumn, helps exposed soil crumble over winter through frosting and defrosting, which helps prepare a smooth surface for spring planting.
5. It increases the output of crops.
Disadvantages of Tillage
1. Dries the soil before seeding.
2. Soil loses a lot of nutrients, like nitrogen and fertilizer, and its ability to store water.
3. Tilling the soil results in dislodging the cohesiveness of the soil particles thereby inducing erosion.
4. Can attract slugs, cut worms, army worms, and other harmful insects to the left over residues.
5. Crop diseases can be harbored in surface residues.