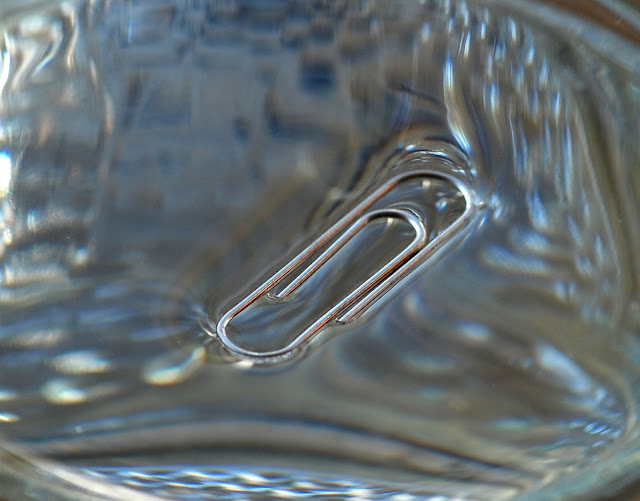 Surface tension can be define as an elastic thin layer acting along the surface of a liquid. Surface tension can also be define as the elastic tendency of liquids which makes them acquire the least surface possible. The cohesive forces between liquid molecules are responsible for the phenomenon known as surface tension. Surface tension is responsible, for example, when an object (e.g paper clip) or insect (e.g. water striders) that is denser than water is able to float or run along the water surface. At liquid-air interfaces, surface tension results from the greater attraction of water molecules to each other (due to cohesion) than to the molecules in the air (due to adhesion). Surface tension has the dimension of force per unit length, or energy per unit area. The molecules at the surface do not have other like molecules on all sides of them and consequently they cohere more strongly to those directly associated with them on the surface.
Effects of Surface Tension
1. Formation of drops.
2. it makes object denser than a liquid to float on it.
3. Separation of oil and water (in this case, water and liquid wax) is caused by a tension in the surface between dissimilar liquids.
4. Beading of rain water on a waxy surface, such as a leaf. Water adheres weakly to wax and strongly to itself, so water clusters into drops. Surface tension gives them their near-spherical shape, because a sphere has the smallest possible surface area to volume ratio.
5. Tears of wine is the formation of drops and rivulets on the side of a glass containing an alcoholic beverage. Its cause is a complex interaction between the differing surface tensions of water and ethanol.
Uses of Surface Tension
1. It is used for water proof material like umbrellas, tents or raincoats and they are usually treated with oil base substance which prevents water from wetting it.
2. They are used for cleansing action of soap and detergents which are use for washing oily plate or dirty clothes.
Categories: Science, Technology