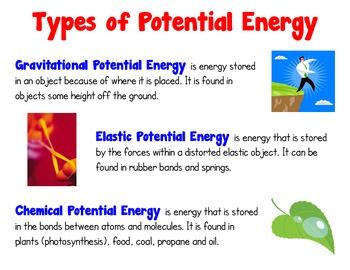 Potential energy is mechanical or stored energy from an object that comes from factors such as its position relative to others, internal stress, electric charge or its condition rather than motion. This object has the capability of producing energy as these conditions change – this energy could be kinetic energy, chemical energy, radiant energy, thermal energy or sound energy.

Gravitational Potential Energy: It is an energy stored in an object because of where it is placed. It is found in objects same height off the ground.

Elastic Potential Energy: This is an energy stored by the forces within a distorted elastic object. It can be found in rubber bands and springs

Chemical Potential Energy: This is an energy stored in the bonds between atoms and molecules. It is found in plants(photosynthesis), food, coal, propane and oil.

The potential energy U is equal to the work you must do to move an object from the U=0 reference point to the position r. The reference point at which you assign the value U=0 is arbitrary, so may be chosen for convenience, like choosing the origin of a coordinate system.