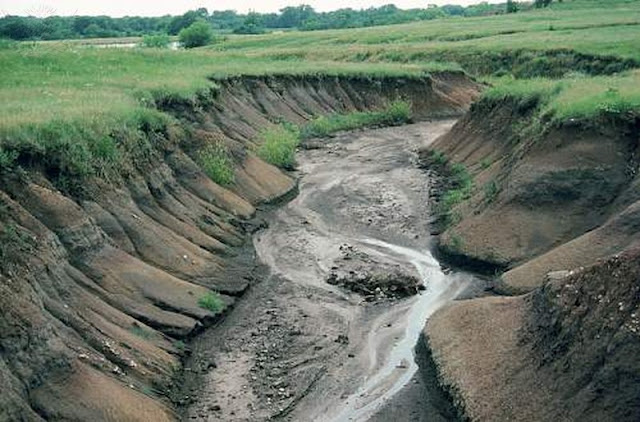 Erosion can be define as a surface processes such as wind or water flow, which transport soil or rock from one location on Earth’s crust to another location where it is being deposited.
Soil erosion can be simply defined as the washing away of top soil during erosion which may cause the loss of soil nutrients. It is a naturally occurring process that affects all landforms. The loss of soil from farmland may be reflected in reduced crop production potential, lower surface water quality and damaged drainage networks. Soil erosion by wind brings about the serious damage in soil by changing the Soil texture.

Sheet erosion: This can be defined as the removal of loosened soil particles or tiny layer of soil from a large area.

Splash erosion: This is the direct movement of soil by splashing or the impact of falling raindrop which creates a small crater in the soil, ejecting soil particles from the soil.

Rill erosion: This is the development of small concentrated channels or flow path on a slope carved by running water which functions as sediment source and sediment delivery systems for erosion on hillslopes.

Gully erosion: This occurs when running water conglomerates and rapidly flows in narrow channels during or after heavy rainfall, its course of forcing its way through the narrow channels, removes soil to a considerable depth.

Rivers and streams occurs with continued water flow along an elongate characteristics.
Thermal erosion can be defined as the result of  melting and weakening permafrost due to moving water.

Bank erosion is the whittling away of the banks of a stream or river.

Coastal erosion is the whittling away of land and the removal of beach or dune sediments by wave action, tidal currents, wave currents, drainage or high winds.

This is the breakdown or decay of rocks or other geological features into tiny particles through a chemical procedure.