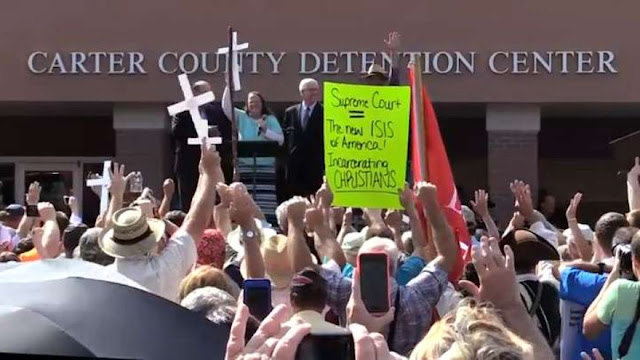 Kim Davis, the Kentucky county clerk who defied a federal court order to issue marriage licenses to same-sex couples, emerged from jail on Tuesday and was greeted by hundreds of jubilant supporters carrying flags, crosses and signs, one of which read, “Supreme Court = The new ISIS of America.”

Davis left the Carter County Detention Center with lawyer Mathew Staver, who had his arm around his crying client. She was also flanked by GOP presidential candidate Mike Huckabee, who has become one of her most vocal supporters.

“She loves God, she loves people, she loves her work, and she will not betray any of those three,” Staver told reporters outside the facility.

U.S. District Judge David Bunning released Davis after five of her six deputies began issuing marriage licenses to same-sex couples. (The lone holdout is Davis’ son.) As part of her release, Bunning warned that Davis may not interfere with the duties of her deputy clerks.

Asked by reporters on Tuesday whether Davis will comply with this condition, Staver said only that she “cannot and will not violate her conscience.”

Huckabee praised Davis for showing “more courage than any politician I know” and offered rhetorically to bear any punishment in her place.

“If somebody needs to go to jail, I’m willing to go in her place,” he said.

The main event Tuesday, however, was a pro-Davis rally — which had some marriage equality supporters counter-protesting as well. Huckabee and Staver quickly went to the staging area after leaving the detention center and greeted Davis’ supporters. “Kim Davis is free!” declared Huckabee to loud cheers.

Another speaker followed the former Arkansas governor with prayer, proclaiming, “We don’t need the Supreme Court when we have the Supreme Being!”