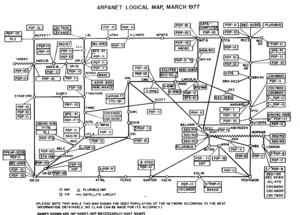 Arpanet is the name of the network of computers from which the Internet has emerged. The Advanced Research Projects Agency Network (ARPANET) which eventually became DARPA was an early packet switching network and the first network to implement the protocol suite TCP/IP. Both technologies became the technical foundation of the Internet.
ARPANET was initially funded by the Advanced Research Projects Agency (ARPA) of the United States Department of Defense.

Packet switching is a digital networking communications method that groups all transmitted data into suitably sized blocks, called packets, which are transmitted via a medium that may be shared by multiple simultaneous communication sessions.
Packet switching increases network efficiency, robustness and enables technological convergence of many applications operating on the same network.